They say it's all in the cards...let's hope they're wrong...

Katherine was never been wrong when it came to her readings of the Tarot. Interpretation off? Well, maybe sometimes. But this time would be different. A mystery was afoot—a dangerous one—and she didn't want to solve it. However, it wasn't that easy. Someone needed her. And she needed to know who. Without dying first. 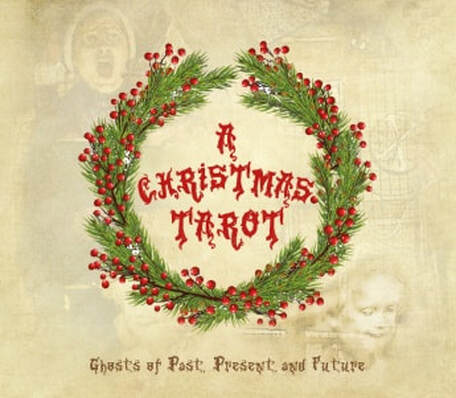 Ghosts of Past, Present, and Future
​
From Dinah Roseberry and Christine "Kesara" Dennett!

For those who love the holiday classic A Christmas Carol, embark on a journey of discovery through this Dickens’s inspired 22-card Majors-only Tarot deck. Visit with interesting ghosts of the season—or any time of year—and connect to the spirit and magic that dwells in all our souls at Christmastime. Look inside these curious and fashionable images to interpret your life path and make the best decisions, receive guidance from Christmas Angels, and determine your past, present, and future through this simple and effective divination tool. Keywords on the cards allow for quick intuitive thinking while viewing situations that reflect daily life. Discover a special channeled Christmas angel message for each card you choose, and learn about Christmas traditions shown on the cards. Whether a beginner or advanced reader, you will be able to navigate the paths of self-discovery through these personal Christmas Tarot interpretations. 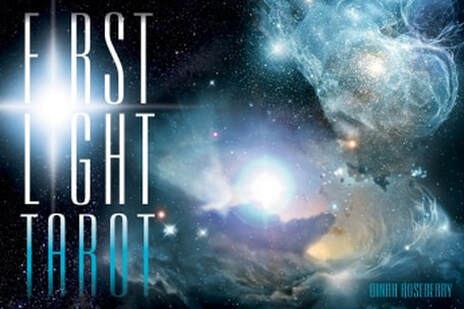 Take your readings to new levels by exploring the depths of the infinite self while also reaching out into the cosmos with this revolutionary66-card Tarot set with two brand-new concepts that will make divination faster, easier, and more accurate for beginners and advanced readers alike. First, 22 new spread cards eliminate the need to learn cumbersome pattern arrangements and instantly address the top issues facing people today. Next, 22 channeled insight cards invite you to look outside yourself, providing advice on how to make life better here on Earth. The remaining 22 cards represent the traditional Major Arcana, allowing you to delve into the self and provide answers to life’s tricky questions. A companion guide explains the new system and offers alternative ways to use the deck, including as a meditation or clarification tool. Also included is a full-size reference card with tips, keywords, and astrological and number definitions.
What People are Saying about First Light Tarot!

From Lexi at Spirit Nature Magazine

Okay, so first off, random thought, right off the top of my head: First Light Tarot is amazing. This is the first time I have come across a deck that combines the major arcana of traditional tarot, the innovation of oracle cards, and a concept I had never heard of before: spread cards. Oh, and let’s not forget the fact that the images of the deck come straight from the Hubble telescope — essentially bringing star gazing right to your altar, or where ever you choose to do your readings — even if you don’t have your own telescope. Yes, my friends this deck is — and pardon the geek speak — a divination limit break. But, on the other hand, considering it’s a limit break, it may not be suited for readers who are just starting to learn their craft.

Dinah Roseberry makes certain to list the definition of “first light” in the companion book. Elsewhere, it is described as an astronomical term, “ first light is the first use of a telescope to take an astronomical image after it has been constructed.”1 The book offers a more detailed and complex definition, but the meaning of the title of this deck is simply explained by this. Tarot and oracle decks can be used as a means of “first light” to look deeper into oneself, to pierce the veil, and to see what is unseen. It does seem that Roseberry’s reason for crating this deck was to give readers a first look into something beyond their own experience. And what better way than with images from far, far beyond what we can see with our naked eye?

The deck and 96-page booklet come in a beautiful box that is decorated with a Hubble image that is also used for the book’s cover and the Magician card. Each images for the cards list the location, and give credit to those involved in the image. These cards are larger than common playing cards, and it takes a bit of skill to shuffle them.

​The booklet begins with an acknowledgment, an anecdote on the title, descriptions of the spreads and how the spread cards can be used, as well as correspondences for astrology and numerology, a section on the images ,and so forth.  It then goes on to explain the 22 majors and 22 insight cards. It devotes a page to each of the cards of the major arcana with upright and reversed meanings given.


Thanks to Lexi for this great review! This one is close to my heart and I did a lot of research with the Light Beings to get it just right!